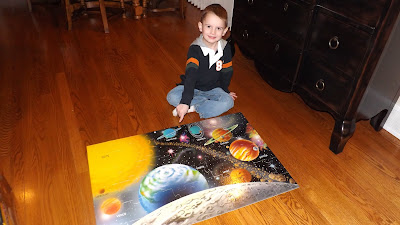 I had my Christmas / New Year's visit last Friday. I was nervous. I really didn't want to go. I don't have a reason for feeling that way, but at times I actually don't feel like a visit. Now that it has been a week since we got together I am still thinking about what a great time we had.
We had dinner together and after that I let the kids open their gifts. They were very excited (as usual). I got D and his sister floor puzzles. We had a great time putting them together.
I got a new camera a few months ago so I was glad to take pics with it. I love taking pics when we have visits because we don't get together every month, and D seems to grow alot between those times we do get together.
His mom let me see his report card (kindergarten) and she also had some Christmas pictures he had colored, and a few class work sheets and a paper craft. She gave me the school papers to keep ( tears).....
She had said that we needed to take a group picture (as I had a camera with a timer, which would allow EVERYONE to be in it). Dad went to get their camera as well. We took a few group pics and a few silly funny face pics... D and his mom disappear. She had said that D had a gift for me. He comes out with a picture frame. It was one that he picked out himself. It said Our Family. He had a speech, he said I love you and we are family and I want you to have this.. I am sure he said something else but I was overwhelmed so I didn't catch it all (and he talks fast and soft). The "family pic" we took is to be put into that frame !!! Mom then hands me an envelope and inside is a Christmas card of the kids and the D's school pic. I lost it then (quicklywipe the tears off of my cheek). She also included a few pics of him and his sister together and a few of just him form the past year. Those pics and school papers mean more to me than anything I could ever dream of wanting. They are gold to me !!
We hung out together and really enjoyed ourselves. That was my Christmas / New Year's visit and I am soooo glad I decided to go. It was one of the best visits I have had in a while.

As 2012 comes to an end I reflect on where I am in my journey...
I guess I grow everyday... I can say that I measure my growth by the major holidays that I can now enjoy.
Christmas today finds me at peace. I don't worry about what my Christmas would be like if I parented D. I know that I did the right thing. Will those feelings of sadness & regrets creep up on me again ??
YOU BET !! I don't worry about them as much as I have in the past.
I know that this time of the year is difficult for many and it may be years before you will feel "normal" (or what we consider normal again). I know that some get visits as often as they like and at times I wish I did as well. I think about all of the times where I wished I was there to see the firsts but then I remember that I chose NOT to parent and I appericate the fact that his parents allow me to be a part of his life as much as they do. I don't think I would want the access that others have because I cherish the times we do have and it makes them that much more special.
Do I think that too much contact is bad ? Yes, I do. I think that it is easy to become so much a part of the adoptive family that we could forget what our place is in the scheme of things.
I am sure many will disagree with me, but I am older than alot of the birthmoms I know and my views are different.
I pose the question : Would you still place your child if you were not given access to your child (such as visits monthly, contact via phone, Facebook etc.)
I can say for me it was the best decision for my situation but I think even IF contact was very limited I would of chose adoption.
Posted by birthmom 07 at 3:19 PM No comments:

I first want to make sure that what I am about to post is MY opinions and not what I think others should do in their adoption in relation to openness.
I have thought alot lately about the last 5 years. Yes, it has been 5 years since I placed the one person who I love more than anything else, into the arms of the 2 people who I trusted would love and care for him as much as I would. So far I was right !!
I think back to the first few weeks  how my mind raced. My thoughts were so negative that I thought I would never be able to see or hold him again. I never had a doubt of the relationship we would form before the birth but once I went home empty handed my mind played tricks on me.
No matter what was said I thought I made a mistake and my heart was broken and I would never be the same.
Present day - We have the relationship that I was told we would have. Maybe not exactly the way I thought it would unfold but now I realize it is the best for all.
I don't get to babysit him or his sister(or his new brother just a few weeks old). I don't get to "stop by" when ever I want (we live 3 hours away), nor do I get a set schedule of visits every few months. I will tell you what I do get though.....
I get to share in his birthday celebration every year since his birth (except his 1st because his mom was in the hospital giving birth to his sister). I get to see him around the Christmas holiday every other year (he spends every other Christmas with family out of state). I can call whenever I want (I don't call often though) and I am friends with his parents on Facebook so I see any pictures posted and can keep up with goings on with him and his family.We do try to get together at least once in the summer (I have went to visit on occassion if I get the need ).
I think we hav boundaries and I like it because he knows I am a special person in his life, not just someone who comes over to babysit or to pop in whenever I think he needs to see me. The visits are pre arranged so he knows that we (birthdad & me) are coming and he is told who I am before we get there (which I am sure he knows by now but to make it a special visit).
Do I wish I was included in ALL of his specials moments (baptism, his first's ) ? I would be lying if I said no but I understand that I chose his parents and in doing so I acknowledge that they are doing the best job and they need to be his parents. It is nice to be able to share in his life bbut I think as a birthmom we forget we CHOSE adoption for a reason. We can't co-parent and we need to allow the parents to parent and understand they are doing what they think is right for all of those involved.
Does being allowed unlimited access diminish how important we are to our children? Do they assume we are just another parent ? Open adoption is new to many and not alot of data is available on this "openness". I never thought I would believe that in the beginning of this adoption I would be saying that I would be happy with the amount of contact I have with son. I understand everyone has varying degrees of openness but I think we need to be grateful for what we do have as some have ZERO contact.
Posted by birthmom 07 at 10:45 AM No comments: 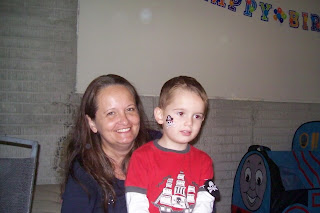 I write this knowing that I tried and haven't succeeded yet. I still do not talk about my decision of adoption to anyone. I thought I had finally came to the place where I could finally open up about my secret.. I find that it isn't as easy as I thought. When you are surrounded by empowering birthmoms you think you can conquer the world. Once you leave that comfort zone reality slaps you in the face !!
We will be judged for our choice and nothing we say or do will change how many look at us. Only those who are involved with adoption really know what we feel and "how we could do that".
I am in a good place with the adoption but I still have moments.. Yes, I still wonder what it would of been like to parent a child but I look at myself and think "NOPE, you did the right thing...
Posted by birthmom 07 at 3:54 PM No comments:

I have been thinking about this alot lately so thought I would post it here.
Yes, I gave birth to a child. Am I a mother ? That sounds strange to some but I have conflicting thoughts on this. I don't have other children to parent so being a parent is somehow different for me.
I see pics of my son and find myself in awe that I actually carried him for 9 months. I look at him now and can't believe that he is a part of me. What parts of him are me and what parts of him are from his family ?
When I have a visit I sit and just stare at him because it is just amazing that I am a part of this person.
Hence the question Am I a parent ? Is the term parent only reserved for those who are raising their children ? Does mother or father fit those who gave birth but do not parent ?
Posted by birthmom 07 at 6:27 AM No comments:

My secret life as a birthmom: Secrets of being a birthmother

My secret life as a birthmom: Secrets of being a birthmother: In the past few days I have really given alot of thought to the meausres I have taken to keep the birth and adoption of my son a "sercret". ...
Posted by birthmom 07 at 5:34 PM No comments:

birthmom 07
Placed son in open adoption in 2007.In relationship with birthdad. Adoption has changed how I look at life.